HSRA is dedicated to providing all young people a chance to realize their full potential, despite any previous setbacks. As we engage students through music and the exploration and operation of the music business, we demonstrate that core learning areas and real world, 21st century skills can be acquired at the same time. More than just earning a high school diploma, HSRA prepares students for a positive post-secondary education and life.
The mission of HSRA is to provide youth the opportunity to achieve a high school diploma through the exploration and operation of the music business and other creative endeavors. 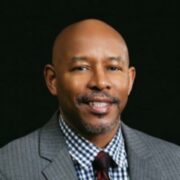 While working with numerous national recording artists and record companies as an entertainment lawyer, Tony met David “TC” Ellis and assisted him in the formation of Studio 4/High School for Recording Arts. During that time, he co-founded Another Level Records, the first national student-operated record label. In addition to his duties overseeing the day to day program at HSRA, Tony continues to work with students in exploring the Business of Music and mentoring those involved in Another Level Records, as well as overseeing the student-operated commercial radio and live video show entitled studio4allaccess, which airs every Friday evening on KMOJ 89.9FM Minneapolis/St. Paul and is podcasted through iTunes.
Tony attended Howard University and Pace University where he earned a BA in Political Studies. He also graduated from Rutgers University School of Law with a Juris Doctorate. Tony is a native New Yorker who enjoys live music, reading and traveling with his family.